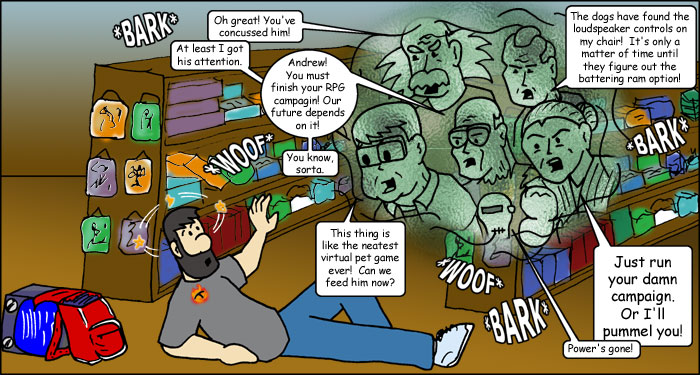 I’m pretty sure I’ve used that post title before.

In any case, here it is! The end of the storyline that was originally going to be my triumphant return to webcomicry, and instead became a mockery of expectations all around. Heck, even this final, individually rather impressive, comic didn’t quite hit every note I’d intended to. Maybe it’ll have an epilogue. In any case, it’s done now, and I can go to sleep.

But first, a reminder of what’s to come. As I said before, Once Upon A Table is officially moving to a “whenever I feel like it” update schedule, meaning updates will likely be rather sparse. In order to make such infrequent updates actually worthwhile, I plan on having an entire storyline complete before anything goes up, so we no longer get stranded in mid story. This will be an exercise on its own, because it will force me to pay attention to an actual structure with easily defined storylines. We’ll see how it goes.

Such a sporadic update schedule means this page will not be changing all that often. I can’t expect people to check this site constantly for updates that won’t be there, so I’m working on alternate means to notify people of updates. First of all, there is the standard ComicGen RSS feed, located here: http://onatable.comicgenesis.com/rss.xml. It’s sparse, but will do for now. I also plan on creating an announcement email list you can subscribe to. In fact, I have already done so as a Yahoo! group, but since Yahoo! requires you to go through a registration step to sign up, I’m going to see if I can find something better, first. I certainly know I wouldn’t register at a new site just to be notified when a webcomic updates.

In a couple weeks or so I’ll be modifying the home page of this site. it will no longer display the newest comic, but will show when the last update occurred and contain a few relevant links. Among other things, this should make ComicGen happy since the above comic totals nearly 400k.

As for when the next real update will occur, I can’t say. To be honest, there’s quite a lot of organization I need to undertake with respect to the comic. I have comic files spread across three computers, two operating systems and about 15 directories. My art supplies and originals are in six or seven separate locations around my home, and my concept-to-final routine is in desperate need of refinement. Yes, much of this is what I had hoped to do during my first almost-a-year hiatus. My post-hiatus performance is evidence as to why I really need to get it done.

The good news is that I do already have rough outlines for the next few storylines, so once I do get going, I should have something to show for it in relatively short order.

In the mean time, I may have smaller updates that will show up on the homepage or the RSS feed. Wallpapers, one-shots, the aforementioned epilogue to Grand Old Time– those sort of things. I wouldn’t expect very many of them, though.

Anyway, it may be a while until I see you again, but I want to thank you for continuing to read what has been, for all intents and purposes, a dead comic. The truth is, it only slumbers. Unfortunately, it seems to have taken a rather heavy dose of cold medicine, so it only wakes up for short periods and spends the whole time rather groggy.