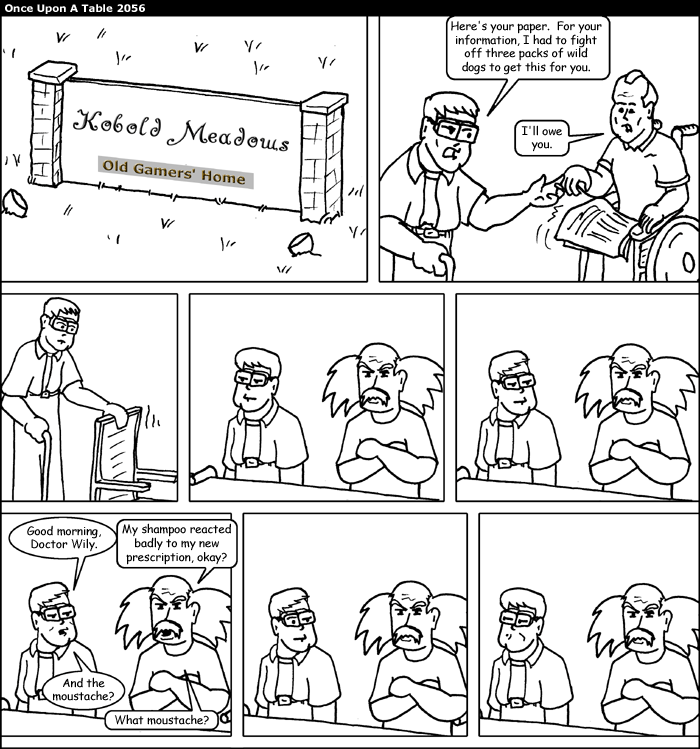 It’s The End Of The Week As We Know It

And I feel fine.

It wasn’t until I was finishing up Monday’s comic that I realized that of all the Elder Tablers, I was the only one to still have most of his hair. Well, except for Pam. Maybe she has everyone else’s hair. I’m not sure.

And now a schedule update: I’m changing the deal. I can do this because I’m in what is known as the position of authority in our little relationship. I mentioned on Monday that my update goal was MWF. Well, that still might be my goal, but I’m going to continue the week-honored tradition of dropping the W. This is an anti-burnout measure. I’ve been monitoring my production these last few weeks, and while I have been working at a pace that can manage three updates a week, it leaves little room for unexpected events such as reading a book. Two-per-week opens up the work-week evening hours nicely, is still double the rate of a weekly update, and yet is often enough that I still do not feel guilty about abandoning color.

So, there. Schedule official. I hope that wasn’t overly painful for you.

What may be painful is the disheartening realization that, after essentially a year of OUaTlessness, you have to sit through at least one, if not a series of storylines that do not actually feature the primary characters of the strip.