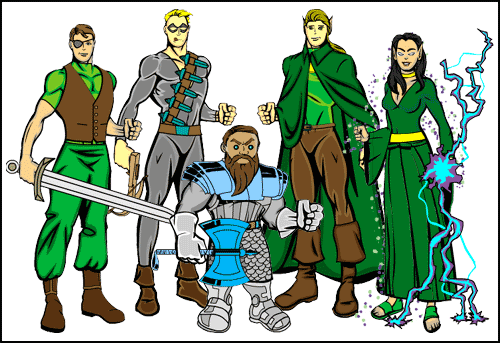 As promised, here’s the not-a-comic update. To top it off, it’s an update constructed entirely out of other peoples’ art!

Fist off, there’s a new piece of entirely nifty fan-art in the gallery. This depiction of everyone’s favorite Scout in the Night brought to you by Draxienne Caryss, who also happens to bring you Neophos17. But only in a general sense; I don’t think she does home deliveries.

In addition to making my characters look more real than they have any right to be, Draxienne sent me the end result of some time she wasted over at UGO’s HeroMachine: The cast of OUaT as comic book heroes.

This made me snap my fingers in disappointment because I had also been wasting some time in that direction, but now one of my own readers had beaten me to the completion of the endeavor. It was probably because of the two or three months I completely ignored it. But no matter! For with the burning speed of, oh, three or four days I cranked out the last couple models and created the composite picture that you see in place of a comic above. I like to call it “Shirk and Artinir Both Choose Rock”. I find the differences between our two versions interesting. I think I was trying too hard to match the characters as I draw them, thus Hew’s “silver platter” eyes.

In any case, that brings us to the end of this update. You may read the next comic in your bookmarks, now.