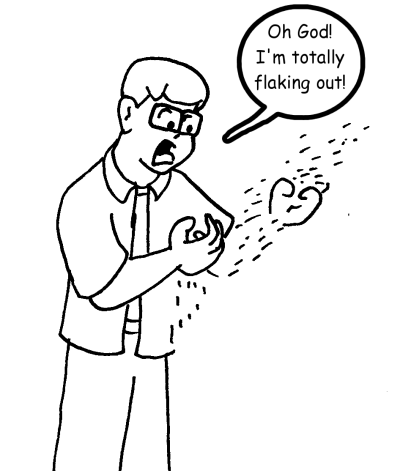 I’ve been a bad, bad cartoonist. I came back all happy and positive, and then I got…flaky. I apologize.

But apologizing won’t stop me from rationalizing.

First of all, I really don’t want to feel the need to just crank out a new comic, because I guarantee I will not be happy with the quality. I have enough pride in my work to not publish complete crap. But I also have the resolve to condone less-than-perfect work in the interest of moving this whole project forward. It’s a bit of a balancing act at the moment. Thus, if I only have a few hours (Yes, even the new, simpler ones can take this long at the moment) to do a complete comic from scripting through clean-up, I’ll feel more justified in simply not doing it. Of course, once you skip one it become so much easier to skip the next one… Comics: Bet You Can’t Skip Just One.

Okay, that’s a pretty lame sounding excuse. What else have I got?

I’ve recently switched my desktop from Gentoo Linux to Ubuntu Linux. For you non-geeks out there, you can condense the next two paragraphs into “computer trouble” and skip ahead.

Gentoo is great and I’m still running it on my fileserver, but I’ve decided that for a daily-use desktop, I wanted a system I wouldn’t have to know *everything* about at any given moment. Why is a long, sordid tale of unappreciated administration tasks and Portage snafus (such as telling me a Java SDK I didn’t have installed was blocking an application I didn’t want to install and thus I couldn’t update anything on my system). And, ultimately, it’s been a positive experience. There’s only been two things that haven’t gone really smoothly in Ubuntu. One is sound conflicts (which I should have expected from running a KDE app as my primary media player in Gnome), and the other is QEMU.

In short, QEMU is an emulator that lets me run Windows inside Linux. I’ve never had any luck with Wine, and I don’t have a processor that can run Windows in Xen. In any case, I’ve been trying to get my Windows 2000 install running correctly inside QEMU for two weeks now. My schedule being what it is, I can spend about two to three hours a day on this task. Since the Windows install itself can take 4+ hours through QEMU, you can see how this might have gone even in an ideal situation. At it was, I kept running into oddities such as Windows Update not working, Service Packs throwing install errors, and then two weeks of attempting to get the hardware-accelerator installed. Just now I am making my final attempt at getting the system stable inside QEMU through a (2 hours and counting) re-install. Should it fail, I will have a backup solution to pursue.

Over the last couple of months, I’ve also put up with no less than three PSU failures, an unfortunate completely-my-fault data loss during the OS switch (nothing irreplaceable, luckily), several instances of bad judgment putting socialization above biological needs for sleep, and a resurgence of a bad habit causing chronic buildup of cardboard on all my horizontal surfaces.

And, just today, UPS randomly decided that my shipment of replacement PSUs that came all the way from Tennessee to my local branch should be returned to sender. In California. I don’t get it, either.

So yes, I plan on making my responsibility to this comic a bit more prominent. The hope being that in the future, if I do write off an update, I’ll at least make some progress on something comicy.

Current plans: new comic on Monday. With any luck I’ll be able to finish the current storyline all the way through. That might only be four updates or so, but hey- that’s a better record than we’ve seen recently.