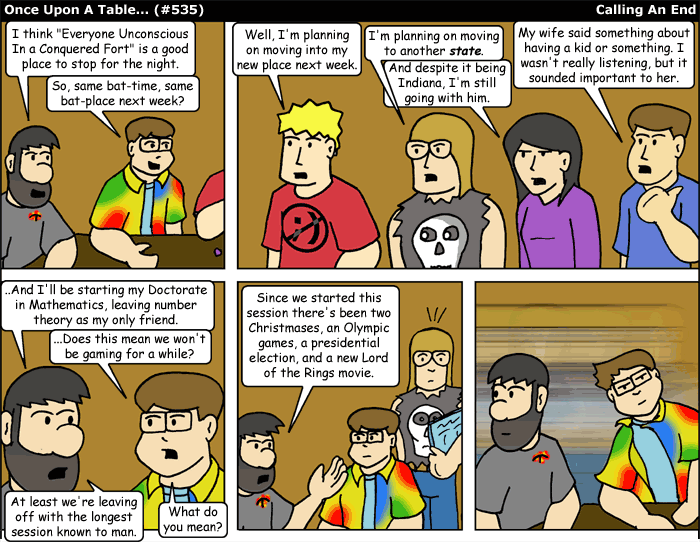 That comic was starting to look a little… final, wasn’t it? Well, it’s not. Though I suppose it is the end of Session Three, which did start back on December 1, 2003.

More importantly, it marks the beginning of another official update-schedule change. Originally M-F, then MWF, Once Upon A Table is now offically “Weekly At Best”. Yes, that’s right, the update schedule you’ve all come to expect is now repackaged and available over-the-counter.

And here’s why: The last couple months of the comic have really sucked. Ill-planned and poorly written, OUaT has been lurching forward; intent only on hitting the necessary plot points and filling in the details with halting dialogue and tripe. And, quite frankly, George Lucas has already cornered that market.

Even if you haven’t felt that way, it’s seemed like it to me which makes the whole thing unfun.

So here’s my plan. I’m lowering OUaT on my personal priority list to give myself time to accomplish other things and to let myself recharge a bit. I will continue to update the site, but the guilt from missed updates will accrue only weekly. Updates will include comics following the characters outside the game as in the previous “Intermissions”, but might also just be sketches or other oddities.

My hope is to build myself a backlog before I return to the “real” story and go from there. Don’t worry about me shutting down the comic completely; I hate leaving things unfinished.