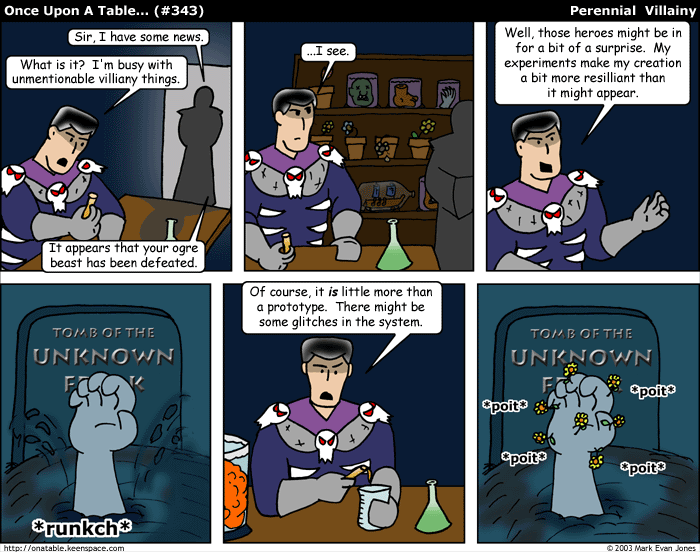 Originally, I had planned to be done with this “behind the scenes” stuff around now. However, I’ve decided to take the long-honored path of dragging it on. That means there will be at least two more strips about people we’ve seen less than a handful of times before!

So I guess its time to throw my hat into this whole Matrix Revolutions thing. I saw it, and it… well… it just kinda sits there and flops around like a fish that never quite manages to get back into the water. If you aren’t of the camp that felt horribly abused by Matrix Reloaded, I definitely suggest seeing it, but I also suggest going to a cheaper, afternoon showing if for no other reason than to understand why everyone is pretty much just saying “eh” about it. Nate says he saw Ebert and Roeper review the movie, and both said something like “well, I guess you should see it if you saw the first two” but neither actually oriented their thumbs in a specific direction. Checking their website, it appears both settled on a Thumbs-Up, but they probably weren’t smiling when they did it.

In other news, people are insane. May I present my proof. With a grand total of one appearance, the Muffin King has, by far, the largest Cult-to-Appearance ratio of any of my characters. I can take none of the credit for this. The Muffin King simply has a Charisma stat that cannot be expressed with common polyhedral dice.