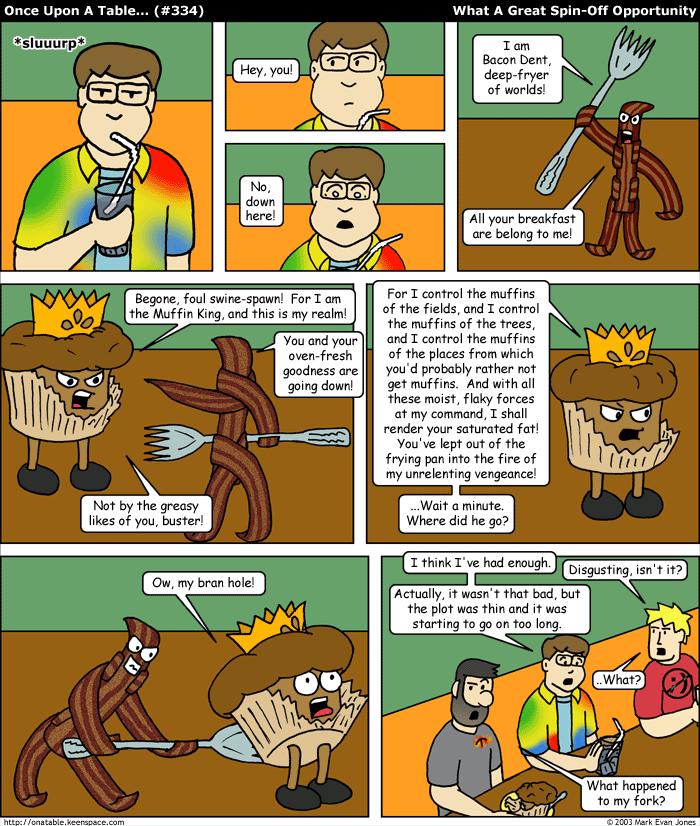 Listen To The Muffin

I’d just let today’s comic speak for itself, but I’m not too sure that what it would have to say would be all that flattering.

So, the US release of Final Fantasy XI (for Windows) is in a week or so, and I thought I’d take the opportunity to declare that I do not consider it to be a “numbered” Final Fantasy game in the slightest. You see, I have this little quirk. I quite like the concept of being able to actually use something I own. This puts me at odds with the MMORPGs out there. Not only do I have to buy the game, but I have to pay monthly and, when the servers inevitably disappear, all that money I’ve spent is now useless? I can still go play Final Fantasy 1 on my NES. Will you be able to play FFXI in fifteen years?

I don’t necessarily hate MMORPGs, though. They can be quite entertaining and if that’s how you want to spend your time and money, so be it. In this case, I’m just very annoyed that a game that should have been called Final Fantasy Online was given a number. Yes, I’m whining. I guess I’ll just have to wait for FFX-2.

Then again, Nate just handed me Disgaea, so I guess I’ll have to set aside any waiting until later. Poor me.