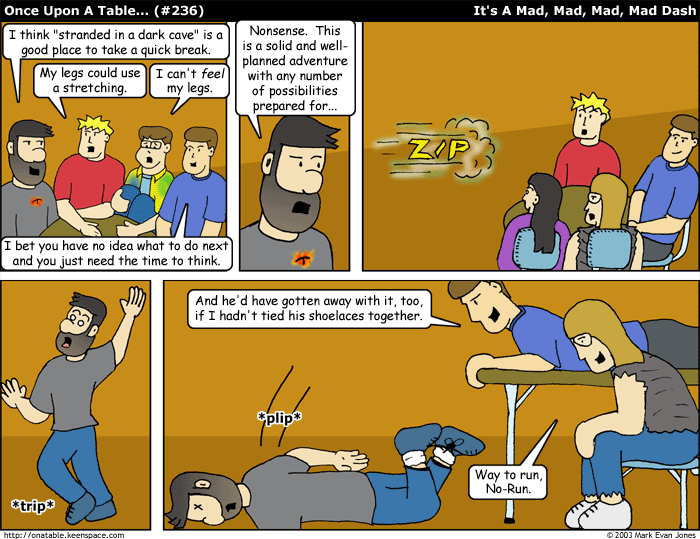 A Change Of Pace

As a matter of minor trivia related to this comic, you might want to refresh yourself on this one.

I have finished my run though Final Fantasy Origins. Many people dislike CRPGs because they think of them as nothing more than mindless level building. That’s never more true than in Final Fantasy II. You can raise any of your individual weapon skills or spells to level 16. You can, if you really wanted, do this over the course of only 16 fights. It’s almost entirely irrelevant what you’re fighting as far as character development goes. Dual-wielding weapons with a level-16 skill is infinitely better than casting any level-16 spell, and also makes it so much easier to *get* to level 16 with your weapons.

It’s a wonderful peek into just how early Square started experimenting with various “systems” in the FF games, but unfortunately, this one just isn’t balanced. I guess that’s allowed for a 15-year-old game that helped to define a genre. I think I would still list Final Fantasy IX as my least favorite, as I retain a vauge sense of disappointment over that particular game.

Oops, originally, I had mistakenly listed Final Fantasy X as my least favorite. I meant IX. Nine was supposed to be this great throw-back game, and it’s advertising slogan was even “The crystals return!” or something similar. Yeah, there were crystals, but they really didn’t have much to do with anything. At one point you fight the four Fiends from FFI in the course of 5 minutes. There’s a large number of references to early FF games in names and locations. In the grand tradition of Final Fantasy, the ending makes no sense, but in this case, the end boss makes no sense, either.

The “System” used in IX was nothing more than the Esper system from VI with a few minor twists. I never had any urge to traipse around the world with my chocobo looking for treasure, partly because it seemed to want you to be spot-on exact with the treasure’s location which is something of a bother. Once I finished the game, I just didn’t care. Which is too bad, because a lot of the characters were interesting.

The best thing about the game was that the world map was the world map from Final Fantasy, rotated 90 degrees. Almost all the other FFI references seemed just thrown in to me.